What Adventists Should Know About Catholics Episode 1

https://www.youtube.com/watch?v=gW8C13fu_40
Posted by Arthur and Teresa Beem at 4:21 PM No comments:

What Adventists Need to Know About Catholicism

Posted by Arthur and Teresa Beem at 6:38 PM No comments:

The Fourth of July: A Season to Think About Freedom by Teresa Beem

One of my first cognizant thoughts as a child was that I wanted to grow up, move to New York, and star in musicals such as The Sound of Music and The King and I. I wanted to act and sing and dance. I thought that was what it meant to be free in America—that passion to pursue your dreams. And I wanted, more than anything, to be an actress.
When I told people my career path, they assumed I was a ham and wanted attention. But that reaction wasn't correct. Even as a child, I knew my heart wasn't craving fame or fortune.

Through the years, I thought about why I wanted, with every single fiber in my body, to be an actress and I realized that it was because I wanted to be a heroine. I wanted to play great, strong heroines like St. Joan of Arc, Madame Curie, Maria Von Trapp and the brave missionary, Anna Harriette Leonowens, who taught the king of Siam's children.

At the depth of my being I wanted to be someone whose life was so epic, they would write stories about me, But I knew that the times were not hard enough to birth great heroes. No, I knew that real epic times and epic people no longer existed. I just assumed that my life would be quite ordinary and God was not calling me to be extraordinary. So, I would get the privilege of playing someone great in a theater and inspiring other people to be heroes.

After all, that is what America is about—getting to pursue your dreams and I dreamed of bringing greatness to the theater!

Now as I look back, I have realized that I had it all wrong.

All people, every single one of us is called by God to be a hero or heroine (or saint!). God does not appoint a few people to fulfill the role of greatness and the rest of us are meant to just cruise through life being the enthusiastic fan in the stands instead of the player on the field. All of us are meant to be heroically in the battle and not read about the war from a distance. We are all supposed to have an epic and heroic life.

How? How does one have an epic, heroic life?

You see, we have two choices—doing what is right and doing what is wrong. The choices we make will set our lives on the path of becoming heroic or on the road of mediocrity.

However, all are called to an epic life like that of Froto, Reepacheep, St. Joan of Arc, St. Joseph, St. Paul…(insert the saint or hero of your choice). God calls us all to greatness. The reason so few—so very few Christians become great is that the epic life of a saint is fraught with suffering and sacrifice.

Each time we will to do right and then act upon that choice, we deny our comforts and desires. Each right choice such as:

We decide to tell the truth no matter the cost.
We decide to react kindly to someone who is falsely accusing us.
We return good for evil.
We give someone else the parking space near the entrance.
We turn off the sexually provocative television show or video.
We stop working to give our children attention.

Right choices sound easy but are hard. It is so much easier and more comfortable to put off that heroic and painful sacrifice of doing what is right. Later, when necessary, we will choose to do something heroically self-sacrificing.

When a person does take the courageous step to do what is right, the dark forces take note. The Prince of this world sees someone stir from their cell. Someone is making a jailbreak and Satan and his minions do not like it.

And make no mistake—each right step one takes does not gets easier. In fact, like a gladiator that wins, stronger temptations often dog someone who shows the dark forces that they are willing to take them on.

One of the great misunderstandings about righteous living is that God never comes in and fights for you. That is a Christian fallacy. God does not take away the punch, but makes you able to take a harder hit. He gives you the grace of supernatural strength—not to ease your way through temptation, but muscle through it like a firefighter rushing into a burning building to save a life.

Most people do not live an epic life as heroes not because that isn't available to them, but because it is very rare to meet someone who wants to be a hero. They'd rather play one as an avatar in a video game. Most people give up because the fight to do the right thing gets fiercer and fiercer.

Most people want a comfortable life of pursing happiness. Most people want instant gratification or rewards or satisfaction for their sacrifices. The life of a saint is not self-aware. Heroes don't feel heroic, they don't see their path as heroic. They see the path as difficult and dark and lonely. Most people don't see the reward at the end. All they can see is the moment by moment obedience to God at all cost. They can feel depressed.

And that is why so few of us have epic lives. That is why I wanted to play a heroine instead of being one.

As we end of this season of glorifying freedom, I have come to realize that true freedom isn't about making easy choices. True freedom is not about the choice of watching Stranger Things versus playing video games. Heroes do not pursue the easy route of fulfilling ones's emotions and passions and desires. That route leads only to more and more enslavement to self. Following easy desires and pleasures year after year wears away and finally strips you of courage and moral character. In fact, it even strips you of your  wisdom and ability to make moral choices.

True freedom is being free enough to make hard choices---and when I write "hard choices" I actually mean the right choices--God's choices.

And true freedom always follows the path of sainthood. It is only the heroes who live and die free.

True freedom is fighting against self and taking the easy route of wrong choices that everyone else is taking. True freedom is being the player on the field and not the fan shouting from the stands. An epic life starts today with every choice you make. And God is calling all of us to be heroes—not play one in a theater.
Posted by Arthur and Teresa Beem at 11:42 AM No comments:

Just wanted to let you all know that Gary Michuta from Virgin Most Powerful Radio just interviewed me. If you are interested in listening--it probably will not be posted on their Youtube channel till tomorrow, but here's the link:

VIRGIN MOST PWERFUL RADIO
Posted by Arthur and Teresa Beem at 2:24 PM No comments:

OVER 100,000 VIEWS of Teresa Beem on the Journey Home Program 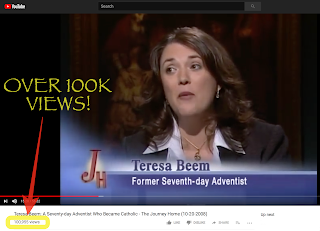 EXCITING! Here is the video for all of you who have not yet watched it!

Posted by Arthur and Teresa Beem at 5:49 PM No comments:

Posted by Arthur and Teresa Beem at 11:47 AM No comments:

Here is a current list of Catholic cardinals and bishops who support an investigation into Archbishop Carlo Maria Viganò's allegations that included a call for the resignation of the pope.

Posted by Arthur and Teresa Beem at 7:21 AM No comments:

DO NOT GO SILENT!

Posted by Arthur and Teresa Beem at 3:54 PM No comments: