I, [the Lord Almighty] will judge your leaders for ruining my vineyard and plundering the house of the poor. The bishops and priests and pastors who have been crushing God's people and grinding their faces. O my people, your guides lead you astray; they turn you from the path.

As Christians, where did we get this idea that our bishops, priests and pastors were going to do the right thing, were going to be faithful to Christ? Certainly not from scripture:


His watchmen are blind, All of them know nothing. Allof them are mute dogs unable to bark, Dreamers lying down, who love to slumber; And the dogsare greedy , they are not satisfied. And they are shepherds who have no understanding; They have all turned to their own way, Each one to his unjust gain, to the last one. "Come," they say, "let us get wine, and let us drink heavily of strong drink; And tomorrow will be like today, only more so." Isaiah 56:10-12 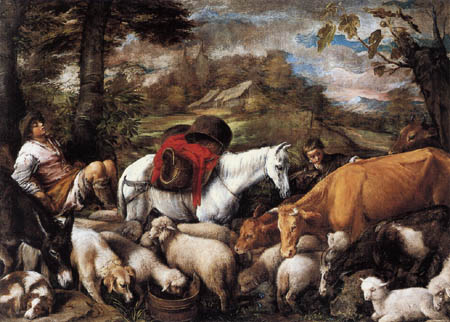 For the shepherds have become stupid And have not sought the Lord; Therefore they have not prospered, And all their flock is scattered. Jeremiah 10: 12

Many shepherds have ruined My vineyard, They have trampled down My field; They have made My pleasant field A desolate wilderness. Jeremiah 12: 10. My people have been lost sheep; their shepherds have led them astray and caused them to roam on the mountains. They wandered over mountain and hill and forgot their own resting place. Jer. 50: 6

Woe to the shepherds of Israel who only take care of themselves! Should not shepherds take care of the flock? You eat the curds, clothe yourselves with the wool and slaughter the choice animals, but you do not take care of the flock. You have not strengthened the weak or healed the sick or bound up the injured. You have not brought back the strays or searched for the lost. You have ruled them harshly and brutally. So they were scattered because there was no shepherd, and when they were scattered they became food for all the wild animals....This is what the Sovereign Lord says: I am against the shepherds and will hold them accountable for my flock. Ez. 24:2-5, 10.

My anger burns against the shepherds, and I will punish the leaders.... Zech. 10: 3


Jesus called Israel's leaders vipers and white-washed tombs. But His own disciples acted little different when in Gethsemane they all scattered at the first sign of trouble. Judas, the man who sold Christ for 30 pieces of silver was among His hand-picked! Peter, the betrayer, was the prince and leader of the leaders! Therefore we know that those who are called are often very weak men and the position as leader often calls them to courageously fight to become strong men of God. And some of them can and do fail in that struggle.

It's not just Israel's problem. After Christ ascended to heaven their were problems with the shepherds. (Jude 1: 12)

The Bible doesn't tell us the shepherds anointed by God and set over the people are going to be faithful. Quite the opposite. The leaders are no better at following God then we are at following our leaders!

So where did this idea of looking to our Christian leaders to be faithful originate? In Christian history? No.

Many popes and bishops failed the Bride. When King Henry VIII threatened England's bishops if they didn't support him as the head of the church, all but one or two of the bishops crumbled and cut themselves off from the pope.

Throughout history God's sheep have been dazed by greedy, selfish, cowardly shepherds. Expect that it will be that way today. Somehow, miraculously the church is still here after two thousand years. Christ has kept His promise to never leave her.

The Church seems to be having its own Gethsemane moment where are bishops are falling asleep or sneaking behind a few bushes in order to avoid persecution. Hold on... just like the Apostles during Friday and Saturday, its going to get worse before it gets better, but know that the Body of Christ, His Bride, will remain even thought the great Apostolic stars seem to fall. Remain steadfast within the Body. Sunday is coming.

Where have I heard that?

Posted by Arthur and Teresa Beem at 12:32 PM No comments: